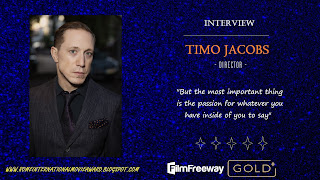 Timo Jacobs started his career in 2003 in the movie "3 Minuten Heroes", directed by the German director Klaus Lemke.
In 2008, he acted in the movie "The Man Who Will Come" by Giorgio Dirittis. Since 2016 he is part of the main cast of the german crime TV series "Der Kriminalist". Timo Jacobs directed the first movie "Klappe Cowboy!" in 2011 and 6 years later he directed his second one: "Mann im Spagat - Pace, Cowboy, Pace".

Q. Hello Timo, it's a big pleasure to have you with us for this interview. Congratulations on your ‘Best Feature Film’ and ‘Best Director’ awards at last April's edition of the “Rome International Movie Awards” (click HERE).
Your new project is “Stand up! Looking for love in all the wrong places”: in a few words, what is it about?
A. Charlie Schwarzer’s memory is damaged from drinking too much alcohol. Charlie is a Stand-Up comedian who has just lost his wife and he’s trying to win her back with humour. All he wants to do is make Emily laugh. But he is struggling. They are two people who love each other very much, but their relationship has become fractured and as a result they feel trapped. So Emily walks out on him, but soon after that she’s involved in a car accident and is badly injured.
Charlie tries to fix his problems by getting back up on stage again, but unfortunately, since he is losing his mind and his memory is just a blur, he’s only able to remember his old act, which has long become outdated.
Then on his way to getting himself a good outfit to wear on stage, Charlie gets mixed up in an art robbery. So with both a damaged reputation as well as a damaged brain, how will Charlie gain enough empathy for his comeback? "Stand up! Looking for love in all the wrong places" is a movie about the beauty of failure and transience.

Q. What can you tell us about the shoot as such, and the on-set atmosphere? Was it difficult to find the right collaborators and, above all, a cast who could translate your cinematographic vision into acting and images?
A. It took me about 4 years to get from the first draft of the script to the final product. In that time, I met a lot of people and that gave me the chance to reflect on the story and to test the vision that I had for it in several other different minds.
It’s always very tricky to communicate what you really want, especially when you are still exploring it within you. But that’s what the whole process is about - trying to adapt your mind simultaneously with your intuition and fill the building of creativity with life.
I pretty much knew most of the people on the project because I’d already worked with them on previous projects, and we did a lot of rehearsals to figure out the truth of the characters' behavior according to the circumstances of the story. I put a Team together from all over the world. The DOP is Portugese, the sound guy is from Sweden, we had an Israeli gaffer and so on - right now Berlin is a beautiful mix of people from everywhere. 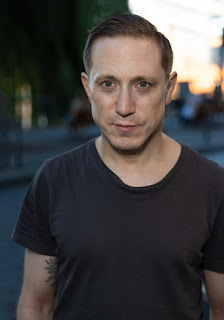 Q. What got you into filmmaking in the first place, and did you receive any formal training on the subject?
A. When I was in my teens I was filmed a lot doing skateboard and bmx tricks with my friends. Later on some little movies came out as a result of this. Then I ran into the filmmaker icon, Klaus Lemke - and since we got connected we made four films together in Hamburg and later on two films in Berlin. I was working as an actor in his movies and since then I’ve done a lot of acting to make my living.
But it’s a complex thing to make movies - you never learn enough, you always have to keep progressing, and you are constantly 'learning by doing'. But as long you love what you do, all the difficulties sometimes get easier to deal with. I say 'sometimes' because film-making is always a constant struggle.

Q. What can you tell us about your filmwork prior to “Stand up! Looking for love in all the wrong places”?
A. Luckily people tell me they recognize my movies right away because of their unique selling point, but even if it’s true that you can recognise them, I think they are all really different from each other, but what they do have in common is that they all go to places where it hurts.
My first feature film, "Klappe Cowboy!" (Clapper Cowboy!) (IMDB) has more like a free camera look which adapts to the storytelling and reflects the anarchic intention of the movie’s lead character - 'Cowboy the Great Director' - on his mission to revolutionise German cinema, and it starts with his neighbour as the lead actor and his other neighbour, the fisherman, who is recruited to fish the sound of their customers as they hit the roads of Berlin and try to recue art.
My second Movie "Mann im Spagat" (Pace, Cowboy, Pace!) (IMDB) is about the same character - Cowboy - who is selling self-made water to save the planet with his movement of Free Swingers. The Central Agency demands results and he decides to stage a charity bicycle rally featuring a roster of two-wheeled Berlin misfits to approve his proposal. Meanwhile Cowboy‘s neighbour kills his mother’s budgie and sets the Devil of Hermannplatz on him to sabotage his plans. But the main question is: how does Cowboy rescue his stubborn mother from getting killed in a shady retirement home? 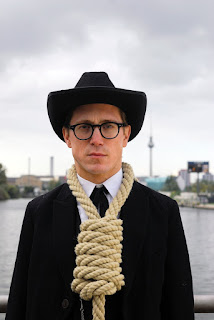 Q. Any future projects you'd like to share?
A. "The future is unwritten" as the late, great Joe Strummer once said. I did put out some dishes and I prepared some food, but it’s not really ready to get cooked yet. The vegetables still need some attention.

Q. How would you describe yourself as a director?
A. There is a person inside of me that wants to be gentle and clear with what he’s got. I love what I do and I try to project that feeling onto others, so we know what we strive for in life. As an actor I can deal with all kinds of directors, and for myself I try to be the best role model of how I get treated. 'Always treat others as you like to be treated yourself' as they say. But the most important thing is the passion for whatever you have inside of you to say. 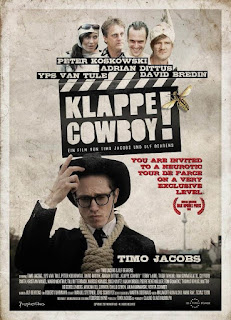 Q. Your favourite movies? And of course, films you really deplore?
A. A definitive list of my favourite movies would be massive, but I’d like to name a few less-know ones and hopefully elevate them out of the shadows of being forgotten: "Beasts of the Southern Wild", "A Hidden Tree", "Chunking Express", "Midsommar", "In the Mood of Love", "Gummo", "The Dance of Reality", "The Party", "Mad Circus", "Birdman", "Midnight Cowboy", "Last Tango in Paris", "The Swimmer", "Citizen Kane", "La Strada".
Films I really deplore? Not worth to talk about. 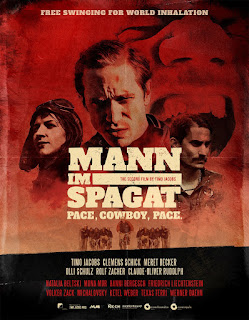 Q. Where can people see your work?
A. You can find my movies on all the common VOD platforms or you can order either the DVD or Bluray. My latest film "Stand up! Looking for love in all the wrong places" is on its way to the cinema over here in Germany and will be available on stream and DVD/Bluray soon afterwards.

Q. Thank you for this very inspiring interview, Timo. Here at the “Rome International Movie Awards” we look forward to seeing and appreciating your new film productions!
A. Thank you really much for the tribute and your interest in my movies. Have a good time. 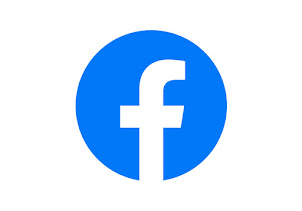 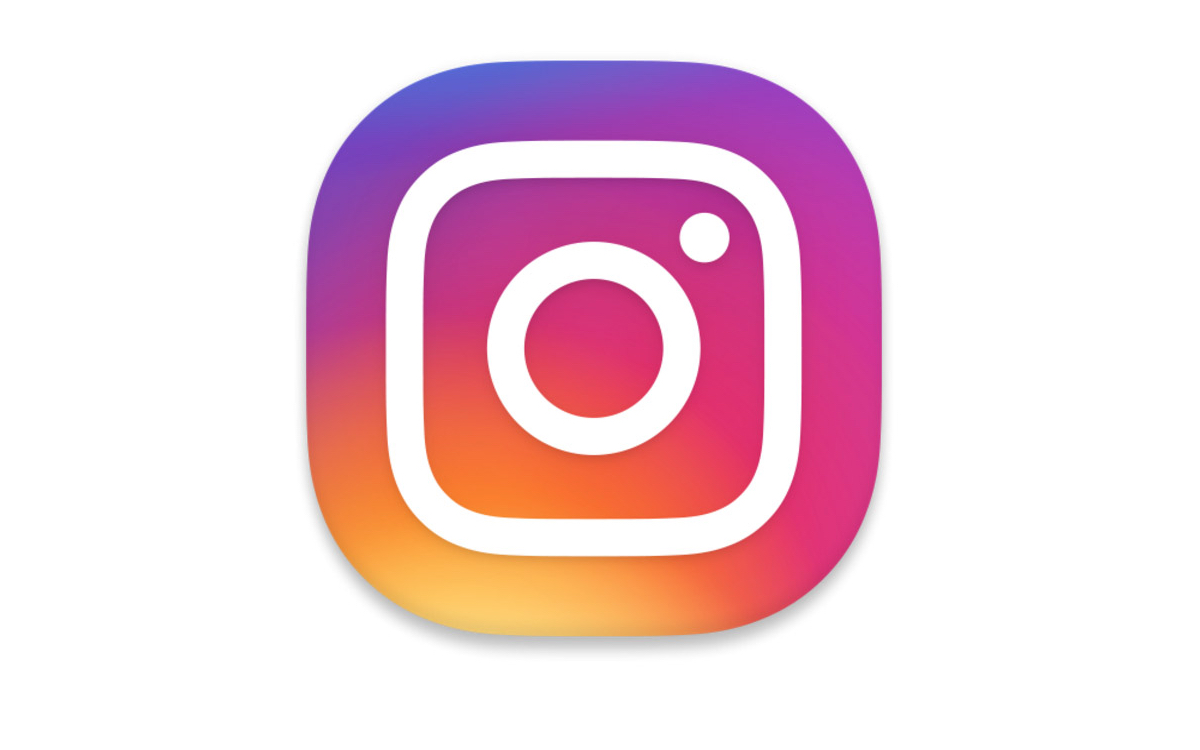 We will ship in 25-30 business days from the beginning of the following month. The payment is not refundable. FREE SHIPPING WORLDWIDE. Please consider that if you are an extra-UE customer or outside United States, you will probably have to pay customs duties when you’ll receive trophy. Please note you will be responsible for ALL Customs Fees and Duty Taxes that your country charges. To inquire about these costs, please contact your local delivery service or customs department. 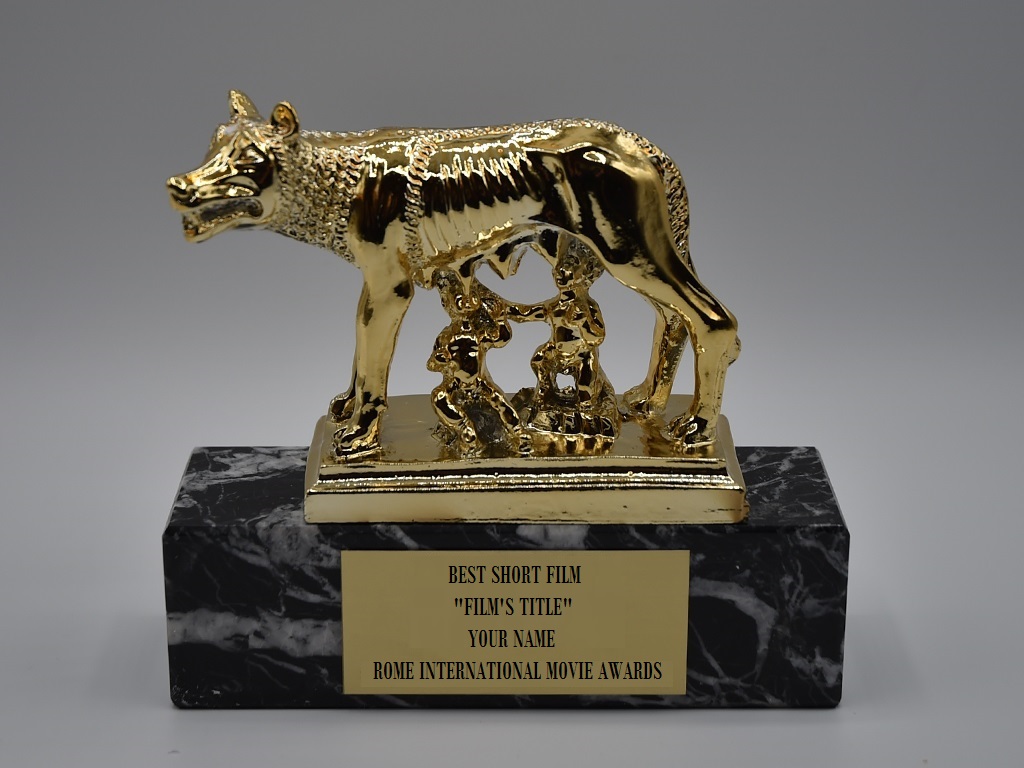